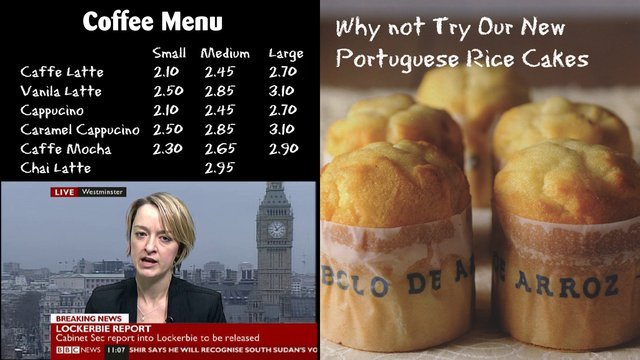 The NetworkTV management solution is easily integrated with any signage platform that requires video feeds, whether it be live TV, live video sources or recorded material. Streamed content is displayed live with streams being received at the signage player across the data network as either multicast or unicast ‘feeds,’ permitting broad distribution of content from a single origin. A playlist in the signage content management system (CMS) contains the multicast or unicast addresses for the streamed content and they are managed similarly to other media through the signage CMS interface.

In addition to terrestrial, satellite, and cable television content, locally created ‘channels’ from a variety of video sources including cameras, computers, or pre-recorded stored video can be created. These can also be incorporated into the signage strategy via a NetworkTV HD encoder which can transcode or transrate and stream any video source permitting the deployment to display other live or pre-recorded content.

Alternatively, when a limited number of signage feeds are required, the signage solution can be extended by integrating the signage player output as a streamed channel through NetworkTV. We call this ‘Signage-as-a-channel. The signage player output is encoded by a NetworkTV HD encoder and streamed across the enterprise network, permitting the display of the signage content on most devices including large format displays (via a set-top-box), computers, tablets and mobile devices.

NetworkTV has successfully integrated with most signage solutions including Brightsign, Onelan, Scala, Silvercurve, Magicinfo, Ping HD, Signagelive, Spinetix, Smartsign and many more, but can also provide our own solution in partnership with MRX Technology.

Some of our clients